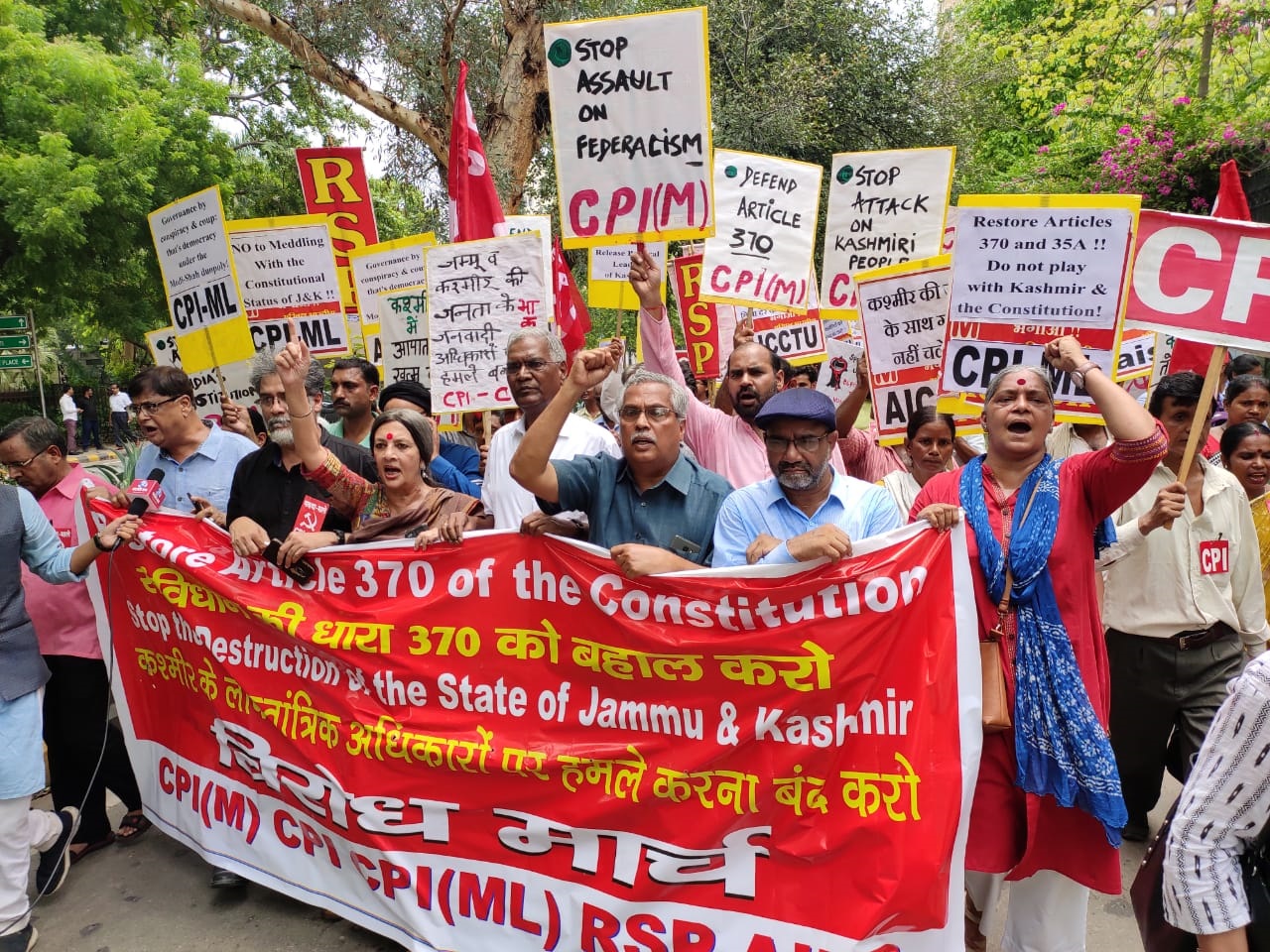 Dismantling of J&K: Authoritarian Assault on Democracy and Federalism

THE Modi government has conducted a lightning strike against the Constitution and federalism. Under the aegis of the Modi-Shah duo, Article 370 of the Constitution has been disemboweled and the subsidiary provision stemming from it – Article 35A – nullified.  They have then proceeded to launch a brazen attack on the very existence of Jammu & Kashmir by abolishing the state and dividing it up into two centrally-run union territories.

All this has been done by stealth and by keeping the people of Jammu & Kashmir under confinement and coercion.  Even the manner in which the Presidential Order, the Resolutions and the Bills to annul Article 370 and dismantle the state of Jammu & Kashmir have been done through subterfuge constitutes a fraud on the Constitution.

There was, till August 6, 29 states in the Indian Union.  With the Jammu and Kashmir Reorganization Bill being adopted by both the Houses of Parliament, this number has been reduced to 28 – an event unprecedented in the history of independent India.  The BJP government has violated Article 3, the Constitutional clause which sets out the process for changing existing state boundaries or creating new ones, by not ascertaining the views of the state legislature concerned.  Such a brazen attack on the rights of states and federalism has not been seen before.

The princely state of Jammu & Kashmir before independence spanned the present state of Jammu & Kashmir which is part of India and the Pakistan-occupied part of Kashmir.  The then Maharaja, Hari Singh, was not willing to accede to India.  He had wanted to keep Jammu & Kashmir as an independent state.  Hence, by August 15, 1947, no decision was taken. The National Conference, under the leadership of Sheikh Abdullah, was fighting against the feudal rule. This was part of the anti-feudal, anti-imperialist movement in the princely states.

It was only when the raiders from Pakistan consisting mainly of Pathans from the North-West Frontier province invaded and reached the outskirts of Srinagar that the Maharaja agreed to sign the instrument of accession which was done on October 26, 1947. The people of Kashmir valley, who were with the National Conference, fought against the invaders. The Indian Army was airlifted to Srinagar and the raiding force was driven back.

It was in these circumstances that the Constituent Assembly, which was drafting the Constitution, incorporated Article 370 in it. Article 370 represented the compact arrived at between the Indian State and the representatives of the Kashmiri people.  It embodied the aspirations of the Kashmiri people to maintain their own identity and way of life known as Kashmiriyat within the Indian Union.

For the Indian State, the importance of this agreement was that, when the country was being partitioned on religious lines and the two nation theory prevailed, the people of a Muslim majority state decided to throw in their lot with the Indian Union which was a secular state.  During the partition, when riots engulfed north-western India, the Kashmir valley was a haven of peace and communal harmony.

The root cause for the problems in Kashmir stemmed from the going back on this commitment.  From 1953 onwards, successive Congress governments at the centre took steps to erode the autonomy provided to Jammu & Kashmir under Article 370. The process of centralisation and denial of autonomy to the state advanced throughout the sixties, seventies and eighties. Article 370 was subverted to eliminate most aspects of the autonomy accorded to the state. From the Constitution (Application to Jammu and Kashmir) Order of 1954 onwards, there were 42 such orders upto 2010, that widened the scope of the central intervention and laws which was not envisaged at the time of the adoption of Article 370.

Through the centralising process, as ably documented by the legal expert A G Noorani, Article 370 was denuded of its real essence.  94 of the 97 entries (of topics of legislation) in the central list have been applied to J&K.

ALIENATION AND RISE OF MILITANCY

Accompanying the erosion of autonomy was the denial of democracy and the suppression of democratic rights in the state. Elected governments were toppled and elections blatantly rigged time and again under central auspices such as during the 1987 election. It is in this background that the growing signs of alienation manifested in militancy and armed struggle with the slogan of ‘Azadi’. Over a period of time, this discontent was utilised by the Pakistani-backed Islamist forces such as the Hizbul Mujahiddin and later the hardcore Pakistan-based terrorist groups like the Jaish-e-Mohammed and the Lashkar-e-Taiba.

From the beginning, the Hindu communalist forces were against the movement led by the National Conference against feudal rule. The Praja Parishad, the predecessor to Jana Sangh, had in fact supported the Maharaja. The Jana Sangh and the Hindu Mahasabha were totally opposed to Article 370 and any autonomy for Jammu & Kashmir. Given the Hindutva ideology, the RSS-backed Jana Sangh and later the BJP, have consistently opposed Article 370 given their idea of a unitarian centralised India.  Moreover, their hostility stemmed from the fact that the Kashmir valley was a Muslim-dominated area.

Just like their Islamist counterparts across the border, the Hindutvavadis and the RSS have wanted to trifurcate Jammu & Kashmir on religious lines, ie, separate Jammu which has a Hindu majority, the Muslim-dominated valley and Ladakh where the Buddhists are in a small majority. The existence of a composite state of Jammu & Kashmir, which has a Muslim majority, was an anathema to them.

In the RSS-BJP narrative, the Kashmir valley is a hotbed of separatism and terrorism because of its religious composition. Their inherently anti-Muslim bias makes them hostile to any democratic aspirations of the Kashmiri people. When they advocated the abolition of Article 370, what they meant was that the people of the valley have to be suppressed under a security-State apparatus.

For the RSS and the Modi-Shah duo, Kashmir is a piece of territory which belongs to Akhand Bharat, while its people have to be treated as aliens because they are Muslim. The RSS and the BJP has been assiduously working to heighten the communal divide between Jammu and the valley. After the Modi government came to power at the centre in 2014, these efforts were scaled up significantly. The hardline approach of crushing civilian protests by force, just like militancy, and shunning all political dialogue has worsened matters in the state. In the past few years, it is the local youth which have joined the militancy in ever increasing numbers. The figures show a steady rise in the number of security forces and militants killed.

The BJP rulers’ contempt for the people of Kashmir became manifest when they launched a huge security operation before bringing the constitutional changes to the status of J&K in parliament. Tens of thousands of additional central armed police forces and troops of the army were airlifted and deployed in the state.  Leaders of the major political parties were detained; there was an information black-out with internet and mobile phone services shut down. The Amarnath yatra was called off and tourists sent back.  Kashmir became a vast prison house. This is how a democratically-elected government treated citizens of a state in whose name they have brought about drastic changes to their lives.

The arguments set out by Home Minister Amit Shah in Parliament for the scrapping of Article 370 were the well-worn, self-serving ones of the Hindutva camp. He claimed that Article 370 had prevented the integration of J&K with India.  In fact, the people of Kashmir willingly joined the Indian Union on the basis of the assurances which were later encapsulated in Article 370. It was this constitutional safeguard which assured the Kashmiri people that their future lay with India.

Amit Shah claimed that Article 370 had bred separatism and terrorism in J&K.  The fact is, it is the erosion of autonomy under Article 370 and brutal suppression of democracy which sparked off the discontent and alienation that led to the rise of separatism and the growth of terrorism aided and abetted by Pakistan.  It is only by restoring the autonomy and democracy denied that the alienation amongst the people could have been tackled.

Amit Shah accused Article 370 for the lack of development and economic growth in the state. It was the rise of militancy and the troubled situation in the last three decades which have hampered development and the opportunities for economic growth. Without arriving at a political solution and peace and normalcy being restored, Amit Shah’s claim that there will be a spurt in development, employment and private investment would flow into the state is wishful thinking.

Finally, Amit Shah blamed Article 370 for the widespread corruption and loot of public funds in the state. It is true that Jammu & Kashmir suffers from corruption and a venal administration. However, the reality is that such a state of affairs stems from lack of accountability and democratic processes.  Jammu & Kashmir has been more or less a police state for long and subject to central rule for prolonged periods (altogether for a period of ten years). The centralised bureaucratic-security apparatus and their political accomplices, who are unaccountable, are the main source of corruption in the state.

The manner in which the Modi government has carried out the coup against the constitution is symptomatic of the authoritarian regime which has now been installed in the country.  A Presidential Order under Article 370 is used to modify another article of the constitution – Article 367 – which, in turn, is utilised to revoke the essence of Article 370.  By this ploy, the concurrence of the state legislature is usurped by the governor since the state is under president’s rule.

That the stratagems of the ruling party and the coercive powers of the Modi government are having its effects on the opposition parties was also seen in the way the regional parties like the BJD, YSRCP, TDP, TRS and others lined up in support of the anti-federal measures. It was a case of wielding the axe to cut their own feet, as the saying goes in Hindi.

The Congress party, which was the original culprit in eroding the autonomy provided under Article 370, also came out as a divided house and was ineffectual in its resistance.

There will, no doubt, be a judicial appeal against the Presidential Order and the Bills adopted. But there is a long struggle ahead against the betrayal of the commitment made to the people of Kashmir.  This struggle is not only about J&K but it is a struggle in defence of democracy and federalism in India.

The CPI(M) has consistently stood for safeguarding the autonomy provided to J&K under Article 370 of the constitution.  It has opposed the erosion of that autonomy and powers under Article 370.  Contrary to the stand of the BJP, the CPI(M) has been advocating maximum autonomy for the state and regional autonomy for the three regions under it – Jammu, the Valley and Ladakh.  While firmly combatting the armed violence by the extremists and taking firm steps to stop cross-border terrorism, the Party has been calling for a political dialogue with all shades of political opinion within the state for a political settlement.

The BJP government’s move to “integrate” J&K by scrapping Article 370 has evoked support among various sections of people.  It is being seen as the decisive way to end the problem of separatism and terrorism – the official narrative propagated by the Modi government.  But the harmful long term implications for J&K and the country are not before the people.

It is for the Left and democratic forces to take up this task of linking the struggle to safeguard the secular and composite heritage of J&K with the overall struggle against Hindutva authoritarianism and in defence of democracy, secularism and federalism in India.