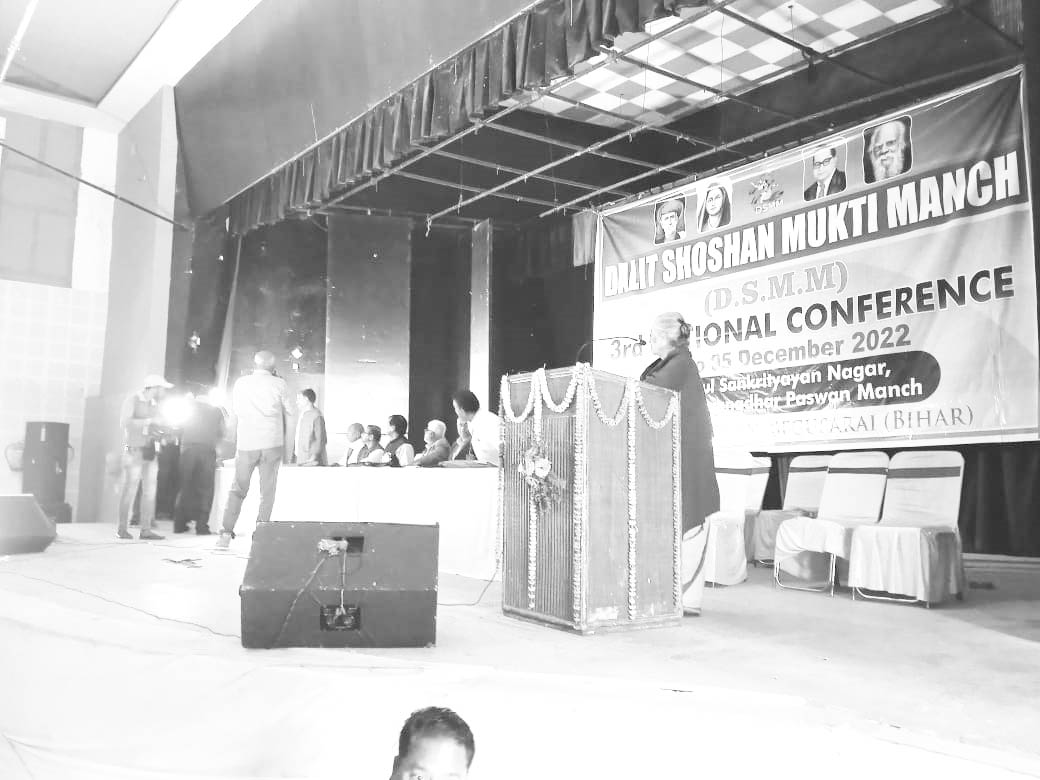 THE third national conference of the Dalit Shoshan Mukti Manch (DSMM) was held at Rahul Sankrityaynan Nagar at Begusarai, Bihar for three days from December 3-5. The conference was attended by over 300 delegates from all across the country who participated in the discussions and in the election of the new leadership. The conference also adopted various political resolutions and pledged to fight for the political and economic emancipation of the country's dalits, adivasis and other oppressed sections.

Before the formal inauguration, the conference adopted a condolence resolution remembering various social and political activists and other significant personalities who died since the last conference in Madurai in 2016. The conference remembered Comrade Mallu Swarajyam, the legendary fighter of the Telangana Armed Struggle of the peasants. It also remembered hundreds of dalits killed in caste atrocities and while working in unhygienic and hazardous conditions in sewers.

The conference was inaugurated by Ali Anwar, national convenor of the Pashmanda Muslim Mahaz, an organisation working for affirmative action for backward sections among Muslims. During his speech, Anwar acknowledged the contributions made by the CPI(M) and other Left parties in the fight for justice for backward sections among Muslims in the country. He noted that when most of the so-called mainstream parties, such as the Congress and regional parties in various states have been avoiding any public expression of commitment to “secularism”, a constitutional value, Left parties are vehemently fighting to defend it despite their limited presence in electoral politics. He also raised the issue of the need for caste census all across the country.

K Radhakrishnan, president of DSMM and minister in the Left Front government in Kerala, presided over the conference proceedings. Ramchandra Dome, general secretary of the DSMM and a member of the CPI(M) Polit Bureau, presented the report of the outgoing executive committee’ work since the last conference in Madurai in 2016. The report highlighted various national, and state wise movements led by different affiliated organisations across the country to fight against the ongoing atrocities against dalits. The report noted that due to two years of Covid-19 pandemic, the work of DSMM was affected.

A total of 328 delegates from 12 states participated in the conference. Out of these, 59 delegates participated in the discussions on the report. They raised various issues related to the working of the organisation and overall political condition of the country. Some delegates raised the issue of membership of the DSMM and demanded that it should be made a mass organisation of the Party.

Delegates raised the issues faced by country’s dalits and other marginalised sections such as threats to reservations, atrocities committed by the so-called upper and dominant castes across the country, violence against dalit women, need of communal harmony and ongoing political persecution of the human rights activists by the BJP led government. Several delegates expressed anger against the criminal negligence by several state governments and the central government for providing safety equipment to workers forced to work in sewers. They raised the issue of continued performance of manual scavenging, which is illegal as per the law made in 2013 and demanded strict implementation of the law and persecution of all those who are responsible for its continuation.

While replying to the discussions, Ramchandra Dome accepted the criticisms made by the delegates but reiterated DSMM executive committee’s decision to keep it as a platform to provide greater space to different state based organisations.

FOR RESERVATIONS IN PRIVATE SECTOR

The three-day conference adopted various resolutions on issues ranging from better implementation of reservations, its implementation in private sector and restoration of the SC/ST sub plan and against atrocities on dalits. The conference demanded that the centre and state governments should immediately implement reservations in the private sector to safeguard the constitutional rights of dalits and other marginalised sections which have come under threat due to brazen privatisation of both education and jobs. The conference unanimously condemned the growing violence and atrocities against dalits and demanded strengthening the existing Prevention of Atrocities against SC, STs Act (POA Act) against such violence and for better justice delivery system.

The conference demanded that the central government immediately take action to restore the ST, SC sub plan which has been gradually removed from its budget. The resolution noted that the plan played a significant role in the overall social and economic development of the dalits and adivasis. It noted that the removal of the plan was a political decision with the intention to harm the interests of the oppressed sections as part of the current government’s attempts to restore the manuvadi system.

During the concluding address, Subhashini Ali gave a call to fight against manuvad and to protect the constitution. She also appealed DSMM state affiliates to form a wider unity with likeminded organisations in their respective states and organise massive protest demonstrations in their respective capitals on February 28 as per the call given by the DSMM national convention in Delhi in November.  B Venkat, leader of the All India Agricultural Workers’ Union (AIAWU) also addressed the conference as a fraternal guest.