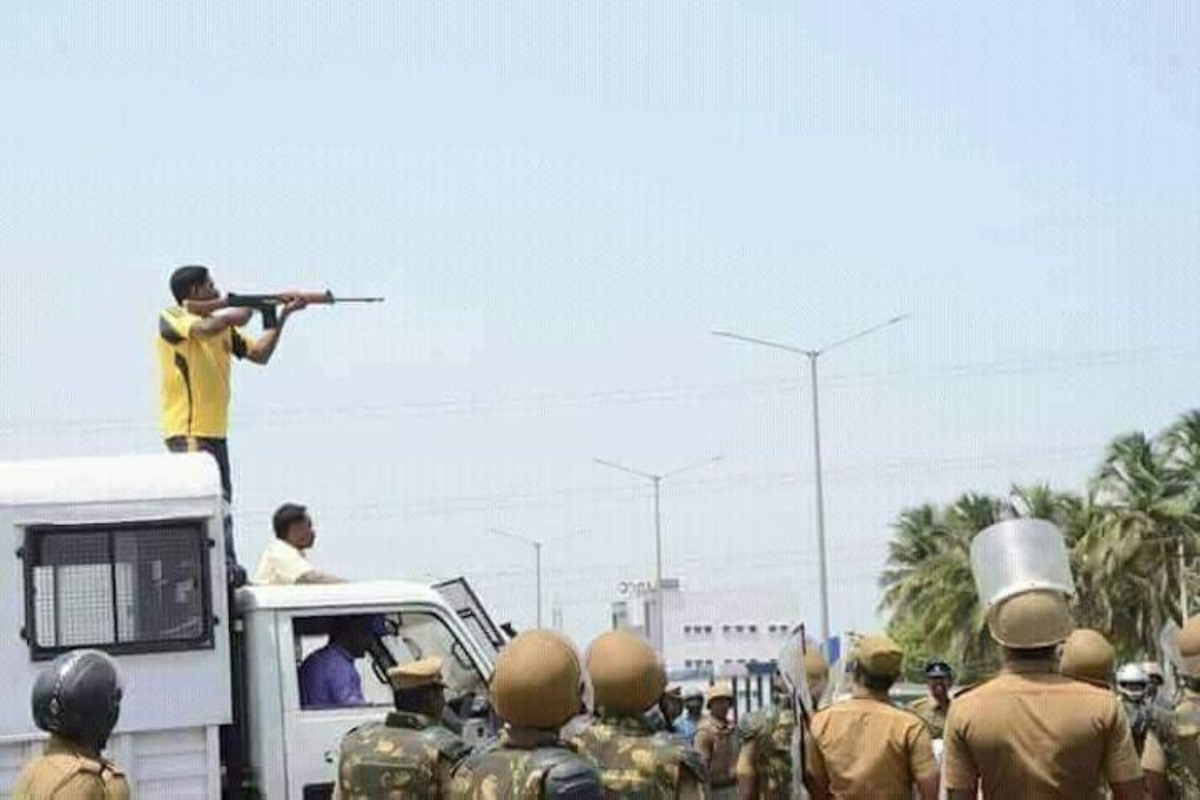 “DID we fight against the government? No, we fought against a private company. And yet bullets were the answers we received. Is it fair?”

Amid the chaos and screams, this was the question raised by the mother of Snowlin - a young woman who took part in the Sterlite protests and fell victim to the gunfire.

Justice Aruna Jagadeesan was appointed a day after to probe into the 2018 May 22nd shooting that killed and injured people protesting against Sterlite.  After four years of inquiry, on May 18, 2022, the retired judge submitted a four-volume Inquiry Commission Report to the chief minister of Tamil Nadu.  As parts of the report began to emerge in the media, the CPI(M) and many sections of the society demanded that the government officially publish the whole report.  In this situation, Justice Aruna Jagadeesan’s report was tabled in the legislative assembly on October 18, 2022.

READING BETWEEN THE LINES

People from all walks of the Tuticorin district united and opposed over many years the exploitation and destruction of the land’s natural resources for the sole profit of a corporate entity. In 2018, on the hundredth day of continuous protests, more than 50,000 people marched toward the collector’s office but faced an unprovoked police shooting that killed 13 and injured countless others.

The Sterlite factory is a subsidiary of the Vedanta Company. The company is owned by Anil Agarwal, born in Pune, and living in London. In 1997, the Sterlite factory was set up in the SIPCOT complex despite public opposition. It was primarily engaged in importing raw materials and minerals from foreign countries and manufacturing of copper, copper cathodes, etc.

Eight years after the establishment of the factory, the report filed by the National Environmental Engineering Research Institute (NEERI) in the Supreme Court in 2005 and the field survey conducted by the department of social medicine of the Tirunelveli Medical College have clearly indicated that the groundwater around the factory is contaminated and the people are suffering from various diseases.

Despite the reports, Sterlite had also started construction work at Veerapandiapuram to double the factory’s output. In order to avoid the required public hearing on its illegal expansion, it convinced the environment ministry that the project’s location was within SIPCOT territory. Justice Aruna Jagatheesan's Commission points out that the high court and the supreme court in 2013 agreed with the opinion of the factory and said, "The Hon'ble Supreme Court allowed the Sterlite plant to function in Thoothukudi in public interest."

Here the reader can understand that public interest is nothing but Vedanta’s interest.

The L&T Company was contracted for the expansion of the factory.  L&T brought more than a thousand contract labourers from Bihar and Odisha, who were unaware of the factory’s toxicity, and started construction. Eleven villages around the factory protested against taking water from the bore wells. As per the report, a study conducted in the above 11 villages disclosed that 48 people had cancer, 49 people had renal failures and other issues, 78 women had suffered abortions, 137 people had asthma, and more than 100 people suffered from various skin diseases. Also, 16 people died in 2015, 28 in 2016, and 31 in 2017 & 2018 due to various diseases.

The Aruna Jagadeesan Commission specifically points out that these factors had pushed the villages to rally up a long-running agitation against the Sterlite plant.

The commission lists the developments that the ruling class and its administration had ignored as the people’s agitation continued to grow.

First, people in various villages began to engage in sit-in protests. On February 12, 2018, more than 500 women and children went on a continuous hunger strike near MGR Park. The commission points out that the district collector, despite being within arm's reach, did not come directly to the protest site and meet the protesters, a dereliction of his duty. Instead of persuading the people to give up the hunger strike, the situation was worsened by malicious police action against those who took part in the protest, those who led it, and those who helped with goodwill.

Second, during the same period, 30,000 people participated in a public meeting with police permission, demanding a permanent closure of the Sterlite plant near Chidambaram Nagar Old Bus Stand. Around 12,000 shops and establishments shut down in support of the rally. In particular, 2,000 fishermen did not go fishing, despite it being their livelihood. Despite the huge size of the rally, it is pointed out that no law and order problems were initiated by the participants during the entire meeting.

Third, on the 44th day of the protest demanding the permanent closure of the Sterlite factory, the Tamil Nadu Pollution Control Board disconnected the power supply to the factory, halting its operation, as the plant management did not comply with the conditions imposed by TNPCB. The district administration failed to make the public aware of the actions taken by TNPCB and its impact on the factory, which would have boosted people’s morale and diffused the situation to some extent.

Fourth, as the strike reached its 50th day, students boycotted classes in support of the strike. They had petitioned the district collector that the hazardous waste coming out of the Sterlite plant was causing respiratory problems, cancer, and skin diseases to the residents of nine villages around the plant. On April 9, 2018, more than a thousand people attended the district collector's grievance redressal meeting, demanding the closure of the Sterlite plant.

Fifth, on May 06 and 11th, 2018, the members of the anti-Sterlite movement held a preparatory meeting to picket the district collectorate. The extensive preparatory work undertaken for this protest had come to the notice of the administration. Also, during this period, many stages of protests had been held on behalf of various political parties. The Commission points out the importance of the protests held near the VVT signal on May 6, 2018, and the demands raised there.

The Justice Aruna Jagadeesan Commission, elaborating on the above aspects, rightly points out that if those in power had intervened and taken the appropriate measures during these developments, the huge loss of lives would have been avoided.

VIOLENCE BY THE POLICE

Sensing the increasing unrest of the people as the hundredth day approached, the district police sent a letter to the district collector on April 10, 2018, detailing the situation on the ground. A copy of the same was also sent to the chief of police, South zone, and deputy commissioner of police, Tirunelveli. The Commission criticises that the collector and the top police officers did not take appropriate action despite receiving the letter.

During the Commission’s inquiry, the district collector, who did not respond to the police’s letter, revealed that he shared information about the Sterlite factory problems and people’s agitation with the then chief secretary, Girija Vaidyanathan, through WhatsApp for several days. He has noted that “The chief secretary assured to bring this issue to the notice of chief minister for necessary action.  As could be seen, the assurance did not get fructified into concrete action and it remained only as an assurance for all times to come.” From this report, it is evident that Girija Vaidyanathan was the controlling agent (not) acting on behalf of the Tamil Nadu government.

THE HUNTING OF HUMAN LIVES BY THE RULING CLASS

Without explicitly stating, the report is clear on the intent of the district administration during the incident: to instigate violence, taking advantage of its prior knowledge of the picketing plan and the intense emotions of the people participating in it.  We can see that the police department also acted in alignment with the district administration’s intent to instigate violence.

The Commission has publicly accused the special executive magistrates appointed to deal with the collectorate picketing rally who not only did not work at their designated place but also stayed somewhere else at the whim of the higher authorities and ordered firing from there.

The Commission also explains in great detail that the fatal shootings were conducted well before the vehicles parked at the district collector's office were set on fire. In particular, the report says that "certain men secretly entered the protest and engaged in vandalism at the rally, and the Sterlite management – with the joint involvement of the police, and per their instruction, worked towards their cause, and there are eyewitnesses who testified this. "Even though the Commission directed the district police and the CBI to identify the hired hooligans, the corresponding authorities have responded in vague language that they have not been able to identify the above persons. This shameful response has also been recorded in the report.

THE AUTHORITIES WERE COMPLICIT

During the rally on the 100th day of protest, three people were shot dead inside the district collector's office without any warning. The Commission reports that Tamilarasan was shot dead while running away; it also states elsewhere that there is a suspicion among the public that Tamilarasan, wearing a red shirt, was specifically targeted because of his Leftist ideology.

Even when there was absolutely no threat to the lives or properties of the police or others, the police shot at those who took part in the protest. What was intended as a unifying protest against the tyranny of corporate capitalism ended up with the police murdering five people, including 20 years old Snowlin. The commission has also recorded the names of those killed in police firing and the brutal way in which the department hunted down innocent human lives without following any protocol. Moreover, the commission of inquiry has openly and extensively recorded the actions of the high-ranking police officers, who provided arms and enabled the lower-ranked police officers to kill innocent protesters.

Without any concern for the lives of innocent protesters who peacefully gathered together for a cause, the government and its administrative machinery have committed the heinous act of murdering them, and thereby ignored the law of the land and the constitution itself.  Justice Aruna Jagatheesan's Inquiry Commission Report categorically points this out.

WHAT SHOULD BE DONE NEXT

·        All those accused by the Justice Aruna Jagatheesan Commission, including the then-district collector and the top police officers, should be immediately dismissed and legal action is taken against them.

·        A case should be registered and a proper investigation should be conducted on the former chief minister Edappadi Palanichamy and the former chief secretary, Girija Vaidyanathan, whose inaction despite the Intelligence inputs was responsible for the killing of 14 innocent people and the grievous injuries of many others for the benefit of the Sterlite management.

·        Although the Commission of Inquiry has noted that the construction of the Sterlite factory has been met with strong opposition since its inception for it contributed to the destruction of the fertility of the soil and the welfare of the people, it is unacceptable that the Commission has not declared the role of Sterlite management in the fatal shooting. Action should also be taken against the government officials who acted in the interest of Sterlite.

·        Adequate compensation should reach the affected families as directed by the Commission.

·        The government should approach any future public protest with the constitution and democratic principles as its guide, instead of resorting to repression.